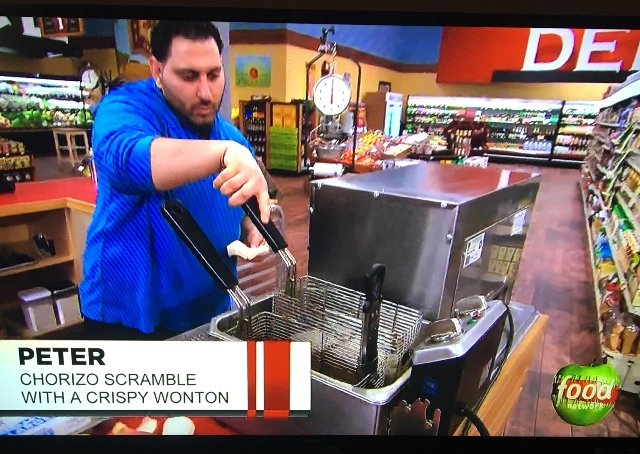 by Pamela Silvestri
of the Staten Island Advance

STATEN ISLAND, N.Y. — Like a jigsaw puzzle, Violette’s Cellar in New Dorp is coming together with one little piece at a time — literally — as workers position 10,000 wine corks along the walls in between wooden slats of varying purple shades.

The aim for this new venture is a late fall opening, just after one of Violette’s owners, Peter Botros, makes a Food Network debut.

“I got my air date!” enthused Botros as construction continued around him. His episode of Guy’s Grocery Games is slated for Sunday, Oct. 22.

But Violette’s construction, a project with Phil Farinacci and the Zurlo family, mainly occupies his thoughts right now. And Botros is excited to share details of his second restaurant, an off-shoot of Stone House in Clove Lakes Park which has maxed out on its capacity for parties. Violette’s will allow some over-flow. The subterranean space also serves as a creative outlet for Botros who is restless to create new dishes and food concepts.

With that, how does one explain Violette’s, a tornado of food, drink, exclusivity, and fun house-frivolity that unwinds through a few rooms?

Let’s start with the restaurant’s name — a nod to co-owner Peter Botros’ mother who passed of breast cancer in 2000. The moniker inspired an altruistic component to the restaurant which will see a $250,000 donation of its sales over seven years will go toward Staten Island University Hospital’s new Comprehensive Cancer’s Center.

Highlights thus far include a flower mural outside by Scott Lobaido, who additionally will present a “secret sculpture” at the Grand Opening. Under construction is a private wine room with rentable wine lockers, an intimate meeting room, a banquet room, the main dining area lined with plush banquettes, and a speakeasy dubbed “The Button Room” due to its button-bespeckled bartop. Amongst all this, imagine 50 antique mirrors throughout the spaces, pieces harvested from the Waldorf Astoria at a recent furniture auction.

“We think they will be a good luck charm and give us the longevity that the Waldorf enjoyed,” said Peter.

And as the name suggests, the color violet reigns with multiple degrees of hue.

Purple streaks through a glittery constellation on a black bar top in the main dining area while a lighter shade of grape marks the walls, mingles with grey on velvety chairs, and turns up its brightness on tufted cushions around various rooms.

The expansive kitchen space will turn out brunch seven days a week from 9 a.m. to 3 p.m. A “Small Plates” menu goes into effect after that daily regimen.

Evening hours run through 10 p.m. each night and 11 p.m. on Friday and Saturday. The Button Room, the resident speakeasy hidden behind a door covered by a sliding bookcase, will be accessible by invite only. The exclusive section will be open Thursday nights with piano or jazz entertainment and revelry planned until about 1 a.m.

There are two menus for Violette’s at the moment.

Dishes bob and weave through various cuisines with ravioli, meatballs, empanadas, Spanakopita “cigars” and Oysters Casino. Since Violette’s opens in fall, there is a decidedly autumnal theme from the Wild Mushroom Potpie with roasted ‘shrooms, leeks, and sherry cream sauce to an Acorn Squash Agnolotti dish presented with chestnut cream, crushed hazelnuts, and apple cider gastrique.

Cheese like brie might be flamed in Amaretto and served with Turkish figs. The burrata is promised to be house-made and Mac & Cheese is baked with smoked Gouda.

On the dinner-ish menu, there is a section called “Large Format.” Oversized dishes include a 48-ounce ribeye, a trio of sauces, wild mushrooms, black truffle-soy butter, and spicy peanut Bechamel set at $89 and a four-pound Maine lobster presented with bacon-lobster ravioli, lobster roll sliders, and lobster oreganata. There is also a massive platter of mashed potatoes on the roster.

Violette’s layout, with two sets of stairs as means of egress, has been grandfathered and it is not wheelchair accessible. Opening day is planned for Wednesday, Nov. 1.