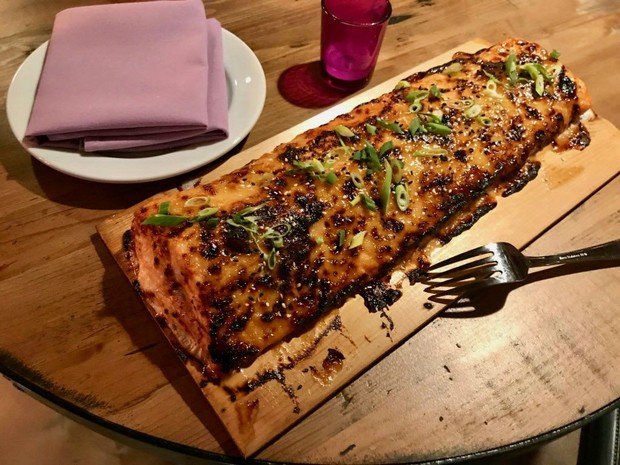 STATEN ISLAND, N.Y. — Well, here it is, ladies and gentlemen, Violette’s Celler and its secret speakeasy called The Button Room — finally. After some kinks worked out on a “Friends and Family” test run and much tinkering with the menu, the subterranean, 300-plus seat restaurant has opened — 2271 Hylan Blvd., 718-650-5050, ViolettesCellar.com.That spot once long ago known as La Botte presents daily brunch starting at 9 a.m. followed by dinner service at 3 p.m.

Here’s a taste of what’s on the menu: A side of salmon for dinner comes with a ginger-miso glaze, scallions, and toasted sesame seeds. It is served on a cedar plank.

Says co-owner Peter Botros, “We soak the cedar planks in apple cider and when it’s time to bake the salmon with the glaze, the cider has imparted itself into the salmon.” 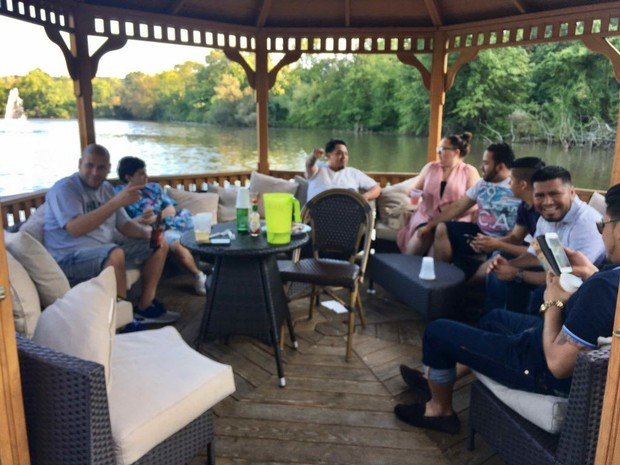 The handsome, upscale eatery with its outdoor, lake-side seating also features a restaurant-within-a-restaurant concept, was a practice run for the entrepreneur.

And, we know Sunday Brunch is big at the Stone House.

And that Peter made a name for himself with dishes starring the poached egg. That North Shore property even won him a recent Advance Reader’s Choice award earlier in the year. 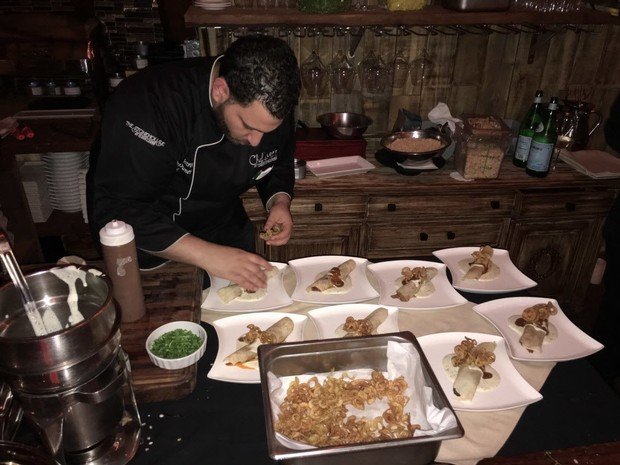 keep in mind that Peter’s restlessness in the restaurant business drove him to open The Chef’s Loft, a restaurant-within-a-restaurant concept on the second floor of Stone House. Here Peter cooks for guests and comes up with ever-changing wine-paired courses reliant on the seasons. 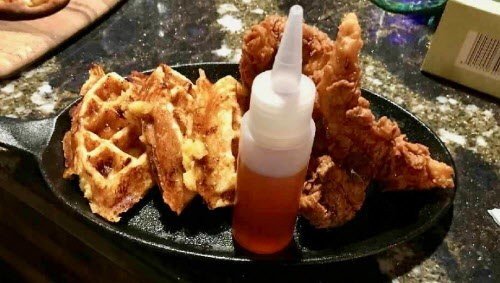 (Courtesy of Peter Botros)
So tuck that info away for this discussion of the new Violette’s Cellar.

Over an image of Chicken and Waffles — cheddar-corn waffles are paired with Southern Fried chicken with a DIY chipotle-honey drizzle — we’ll talk about brunch first.

Says Botros, “For my partners and I, although nothing was easy, the most difficult obstacle we had to overcome to get to ‘open,’ was staffing. Staten Island restaurants have always had a tough time staffing, constantly in competition with the allure and the bright lights of Manhattan. Now an industry-wide shortage of talent hits Staten Island even harder.”

How did Violette’s prepare for the opening?

“In preparation for our grand opening, we decided to host a ‘Friends and Family’ day. The purpose of the day is to get feedback from friends and family on food, service, etc. This is common in the industry.

“We took it a few steps further, although we are certainly interested in feedback about the food and service, from my experience I’ve found that the staff ‘movement’ is also incredibly important. Server stations, prep areas, the cooking line layout are all imperative to a successful operation. However, unless the staff is under pressure the problems won’t rear their ugly heads. We purposely overbooked our Friends and Family Day to create chaos and strain. Our very own stress test!

“After 300 guests and every inch of the venue crawling with people, we certainly saw lots of problems. Some menu items were too difficult when the restaurant was busy, some server stations needed revamping and we needed to do a better job explaining the small plates concept to our guests. After diagnosing the problems, we were able to make changes to prime the restaurant for success.”

He says the first night of business, Monday, Nov. 6 went off without a hitch. 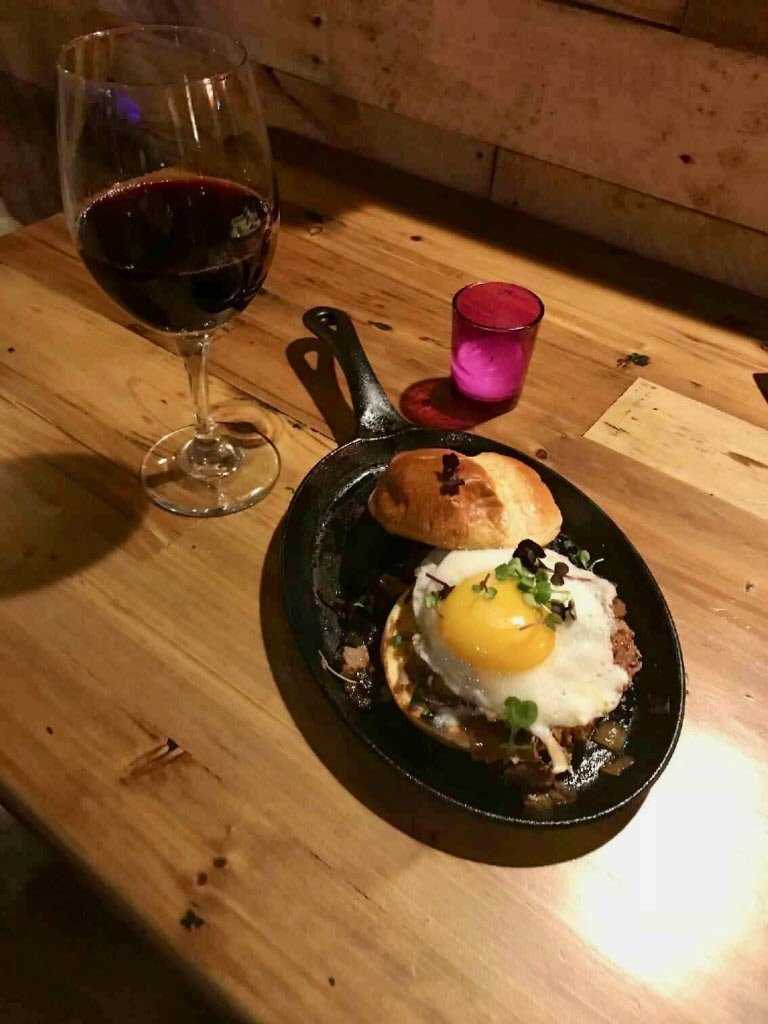 (Courtesy of Violette’s Cellar)
A glass of wine would go nicely with that.

Also on the menu: Philly Cheesesteak and Eggs is a dish made with shaved rib-eye steak, caramelized onions, truffle goat cheese, and a fried egg. Best wine for the pairing, says Roberto Hernandez, is the restaurant’s sommelier, are Violette’s Cabernet selections by the glass. 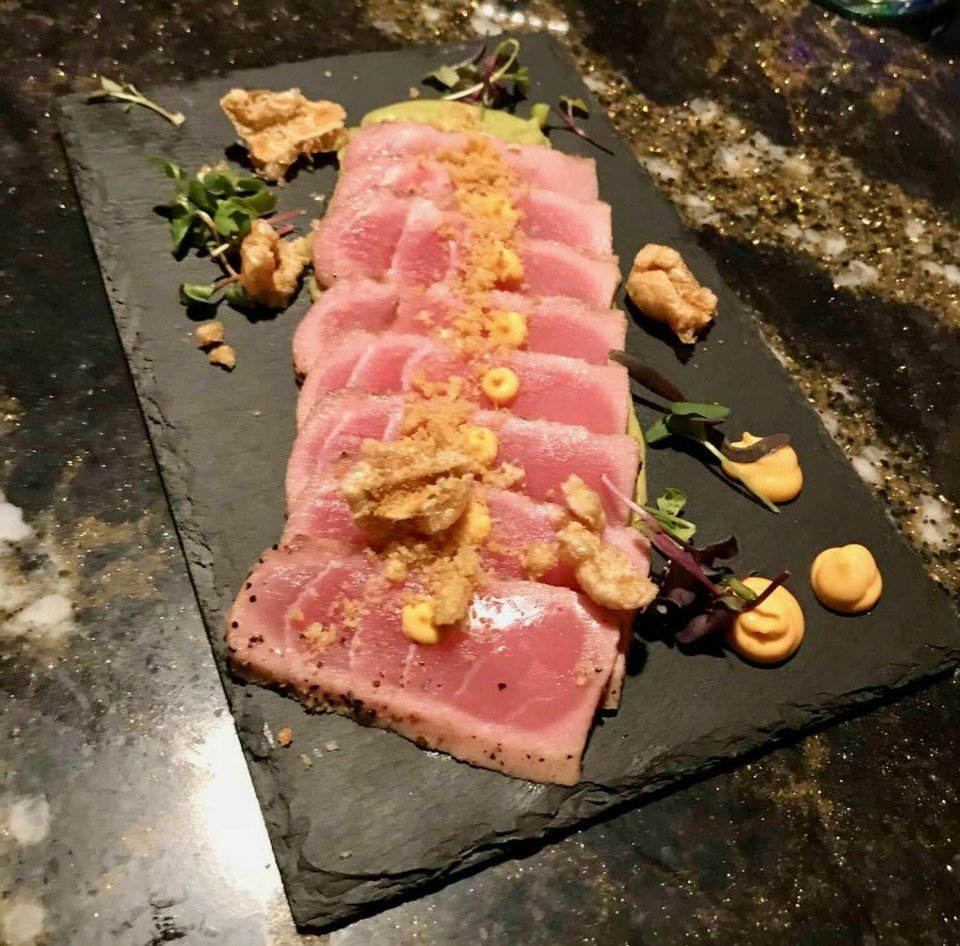 (Courtesy of Violette’s Cellar)
Next up on the menu are the “Small Plates.”
This is Seared Ahi Tuna with Japanese spicy mayo and avocado mousse plus that crunchy helping hand brought to you by pork rinds. 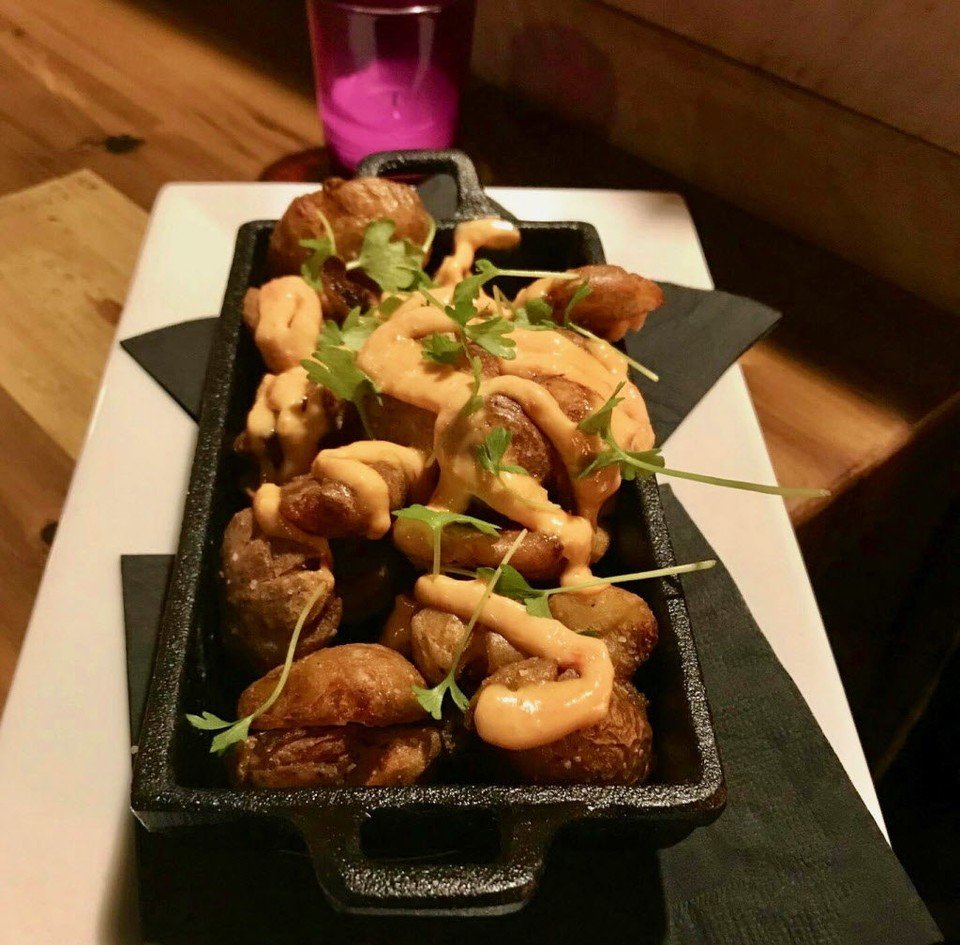 Like to have your brisket and eat short ribs, too?

Well, there’s an item for that at Violette’s, like the Brisket and Short Rib Sliders, made with a 50-50 split of ground meat. Three sliders come with spicy tomato jam and provolone. 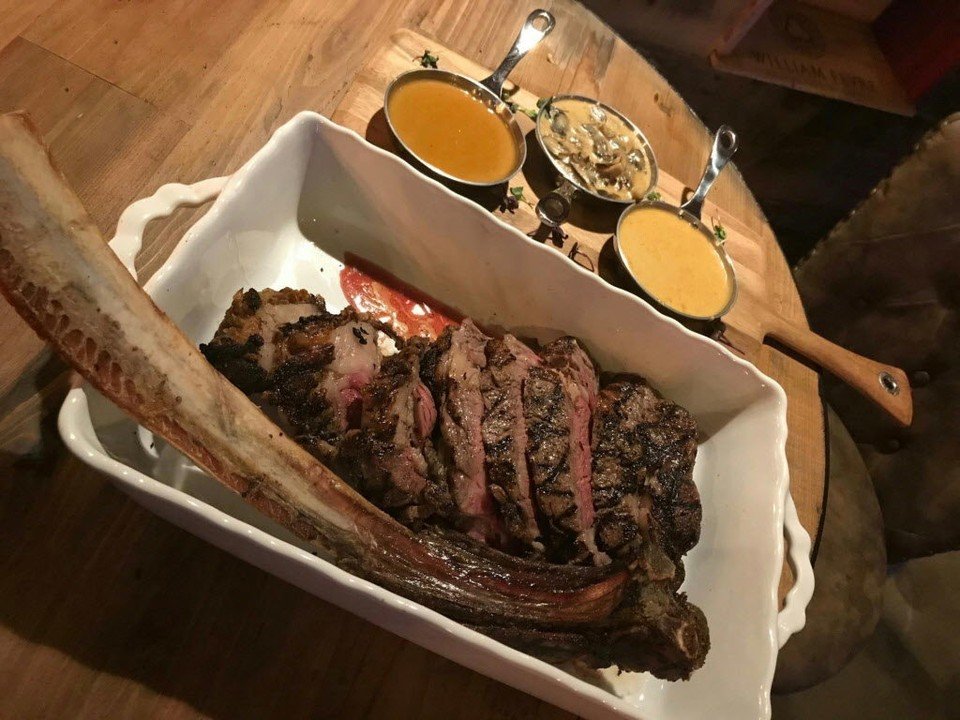 Fred’s not here right now but instead, there’s the 48-ounce tomahawk steak in the house. For $96, the hungry man (or woman) can feast his (her) paws on a 21-day dry-aged prime cut served with a trio of sauces — truffle soy, wild mushroom, and spicy peanut bechamel.

There are salads, too. 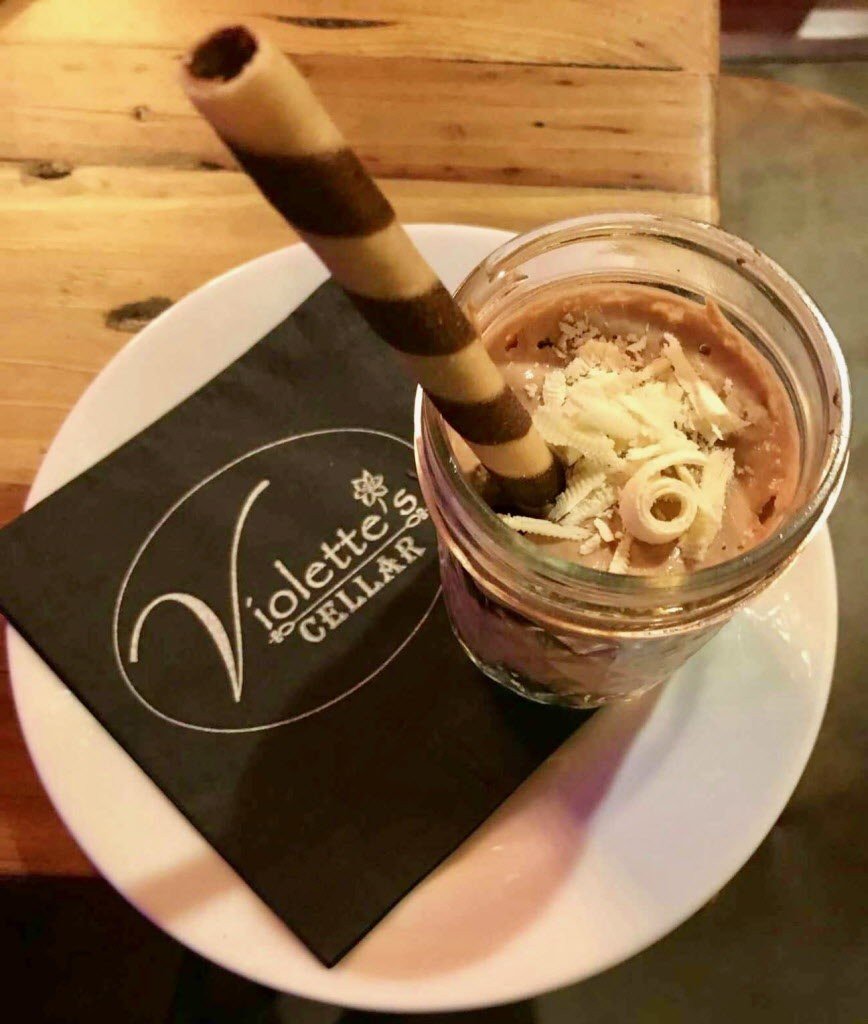 (Courtesy of Violette’s Cellar)
And desserts. 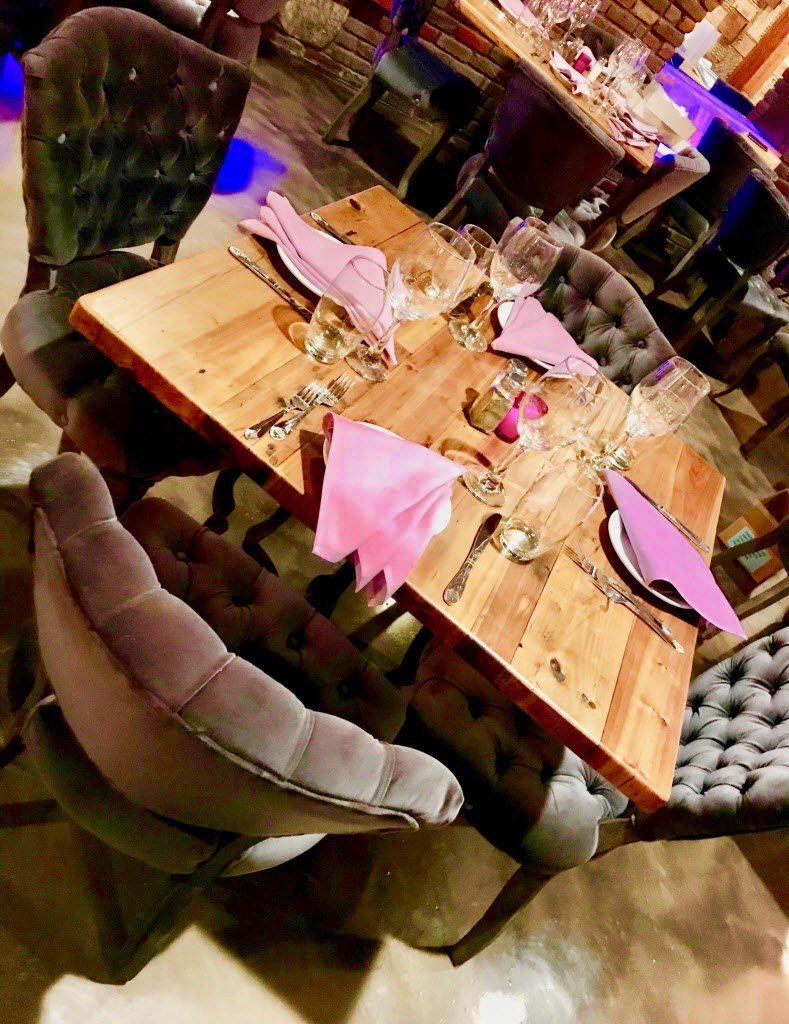 The design of Violette’s is interesting.

Tables at Violette’s are made from reclaimed wood. The color of the linen napkins, of course, is purple and various shades thereof.

Like Stone House and its moving parts, Violette’s features many different pieces to its jigsaw layout.

The main dining room seats 100 including the bar while the adjoining banquet room seats 150 guests. An outdoor pavilion will have room for 60 patrons. A wine room features a dining section for 8. There is a private room for 18.

Let’s take a look behind the bookcase.
This is The Button Room.

It takes its name from the bar which sports thousands of buttons in its epoxy top. The Button Room is open two nights a week and is accessible by passcode only. The secret word is?….shhh, you’ll have to sign up on the restaurant’s social media accounts to get the answer each evening.

There are three partners in the Violette’s-on-Button Room project. 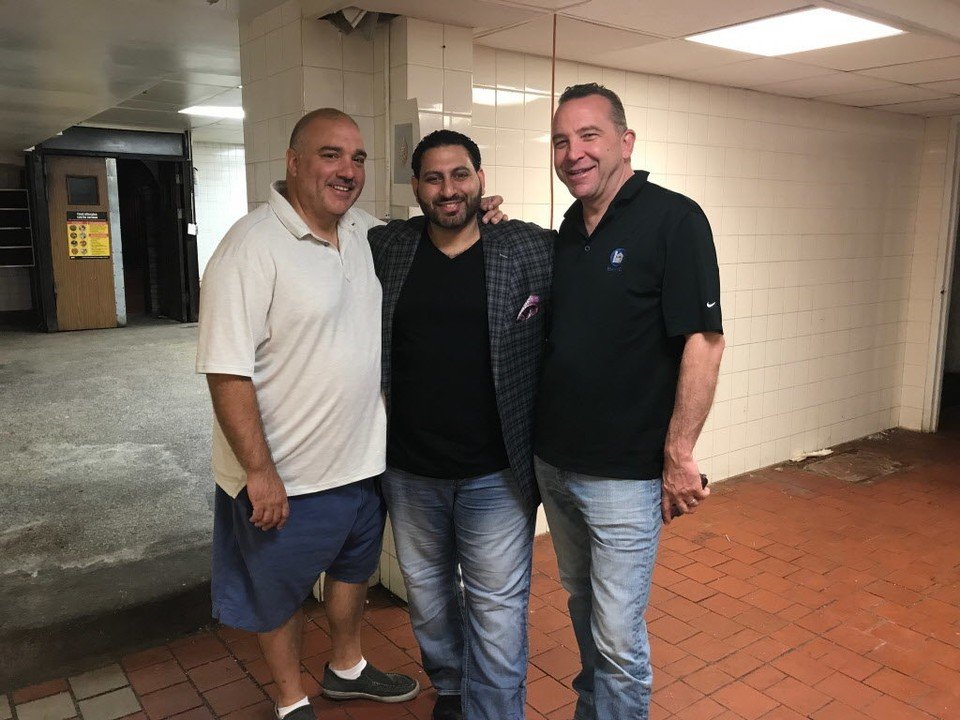 They overhauled the New Dorp space from the bottom up.

Partners in Violette’s Cellar are, from left to right, Ralph Zurlo, Peter Botros, and Philip Faranacci.

The build-out included a mural by Scott Lobaido. There are about 50 antique mirrors throughout the cellar spot, pieces harvested from the Waldorf Astoria at a recent furniture auction.

The restaurant will donate $250,000 of its sales over seven years.

The recipient of such generosity is Staten Island University Hospital’s new Comprehensive Cancer Center. The altruism stems from struggles owners Botros and Farinacci’s family members (and Peter himself) have had with cancer. The restaurant is named for Peter’s mom Violette who passed away from the disease.