STATEN ISLAND, N.Y. — Peter Botros has been selected to cook at James Beard House in Manhattan at a February dinner, a great honor in the professional food world. He is among the very few Staten Islanders invited over the years to present in the famed kitchen.

The dinner is titled “Dreaming in Chocolate” and is scheduled for Tuesday, Feb. 13 at 7 p.m. The cost is $135 for Beard House members and $175 for the public. Reservations must be made online on the Beard House website.

The late James Beard is called the ‘father of American gastronomy.’

Since the mid-80s, his Greenwich Village home played host to guest chefs invited to cook dinners and luncheons for members of the James Beard Foundation. This is a not-for-profit with a mission “to celebrate, nurture, and honor chefs and other leaders making America’s food culture more delicious, diverse, and sustainable for everyone.”

Botros says he was vetted by representatives of the Beard Foundation who sampled his cooking.

The decadent menu just in time for Mardis Gras

Combining sweet and savory elements with chocolate, the menu will start with three canapes, one of the roasted beets, dark chocolate-whipped goat cheese, and a cocoa powder dusting. Additionally, Botros will present Crispy Black Truffle Polenta with shaved white chocolate and Locatelli cheese plus Sriracha Duck Spring Rolls with tangerine and chocolate drizzles. 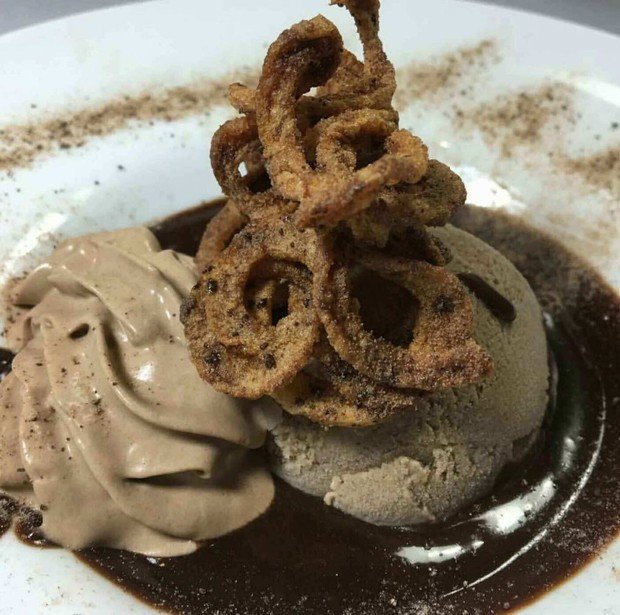 The fourth course will focus on filet mignon, rubbed in espresso and presented with white chocolate-whipped potatoes plus chocolate-port wine demi-glace.

For dessert, there will be a “Banana Chocolate Empanada” offered with “Mexican Hot Chocolate Gelato” and “Horchata Creme Anglaise.”

Restaurants so far for Botros

The Stone House’s restaurant-within-a-restaurant came later as “The Chef’s Loft,” an intimate dining space where Botros personally cooks for guests on a second-floor balcony.

After building out brunch at the Stone House, Botros opened Violette’s Cellar in New Dorp last fall with its brunch-by-day format and more formal evening menu.

There is a speakeasy within the sprawling, subterranean spot dubbed “The Button Room.”

The restaurant’s moniker, Violette’s, is a nod to Peter’s mother, the late Violette Botros, who succumbed to cancer. A percentage of the venture’s proceeds goes toward the soon-coming Comprehensive Cancer Center at Staten Island University Hospital, Seaview, an amount pledged at $250,000 over the next seven years.

Botros’ next restaurant project will be a barbecue eatery. Negotiations are in the works and, if all goes well, the new place will take root mid-Island within the next year.

Botros cooks for not-for-profits around the Island. This is Stone House’s ravioli entry for the 2017 Community Resources Pasta Bowl, Travis, which came stuffed with a meatball and topped with creamy ricotta cheese plus fried basil.

But the Beard House is a huge honor for Botros.

Botros will be one of only a handful of Staten Islanders who have cooked and presented for guests of the Beard Foundation.

In 1995, Chef Martin Mendoza of the former Biscotti restaurant, New Dorp, was the first Staten Island chef to be the main performer at the Greenwich Village townhouse. He orchestrated his menu with Italian food expert Anna Teresa Callan, who oversaw Italian food events at the house back then. Mendoza’s Staten Island counterpart at the dinner included Lisa Simon, co-owner of Biscotti.

Biscotti co-owner Fran Simon told the Advance at that time: “While the menu in our restaurant has some influences from Asia and Mediterranean countries in general, we concentrate on Italian.” 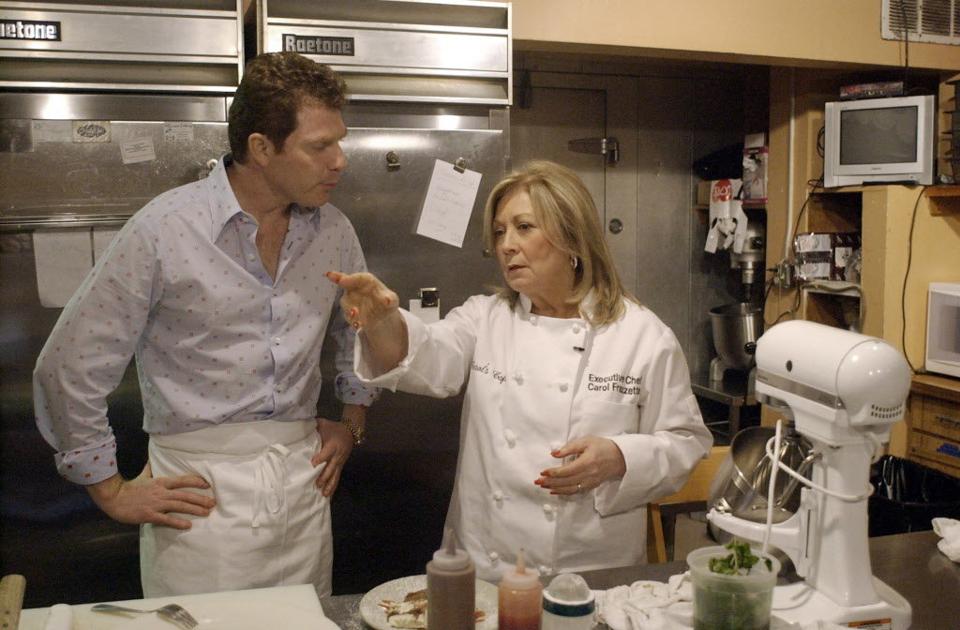 In October 2003, Carol Frazzetta of the former Carol’s Cuisine and Cooking School in Dongan Hills cooked at the Beard House.

She told the Advance’s Jane Milza at the time:  “I learned to be eclectic in my style…
“Getting all of the logistics in place is the most difficult part of the planning.”

The menu consisted of five appetizers, a salad, pasta course, two entrees, and an assortment of homemade desserts. Some items, according to the Advance, included, “Maple-Roasted Stuffed Bacon Rolls, followed by Spicy Italian Sausage-Stuffed Mushrooms, the chef’s prized Miniature Lump Crabcakes with a Sherry Wine Sauce, Sicilian Pizza with Caramelized Onions and Barbecued Duck with Ginger and Sesame Seeds.”

And those were just the starters.

Ms. Frazzetta added the Beard honor to her already impressive resume that includes work at La Varenne, the Cordon Bleu, and the Culinary Institute of America. She is retired after closing her restaurant and cooking school at the end of 2016. 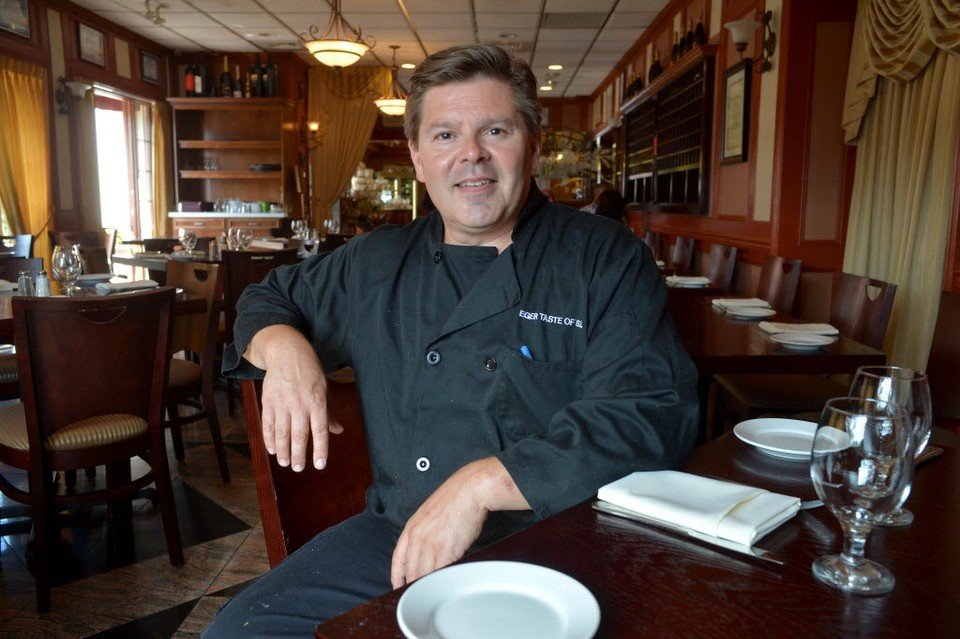 Rick Laakkonen, celebrated by the James Beard Foundation in the early 2000s, did a tour at the former Pasticceria Bruno, now called Bruno’s NYC Bakery and Restaurant, in Dongan Hills. The Finnish-born Culinary Institute of America grad worked over the years at l’Ecole Le Nôtre in France, Alain Ducasse’s Le Louis XV in Monte Carlo, and eventually in Manhattan’s Petrossian and Luxe. He also owned Ilo in the Bryant Park Hotel, where he earned enormous accolades.

In 2002, Patricia Reardon Radicevic, a Staten Islander from New Brighton who married restaurant owner Branco Radicevic, was bestowed with the “America’s Classic” Restaurant Award from the James Beard Foundation for the family’s eatery Three Brothers Serbian Restaurant in Milwaukee, Wisc.