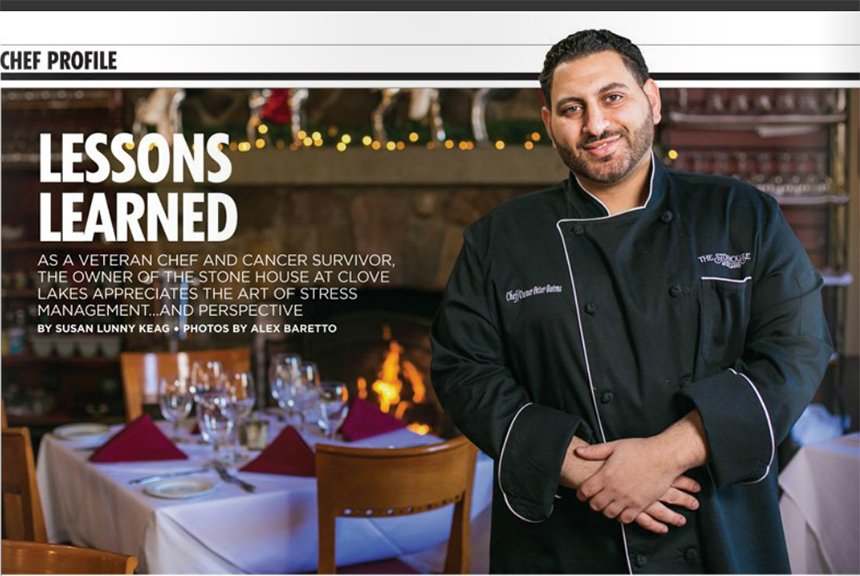 Peter Botros knows his customers. With Valentine’s Day right around the corner, he can guarantee two things: first, couples are going to want to come to his restaurant, The Stone House at Clove Lake, tucked away in scenic Clove Lakes Park, for a romantic dinner.

“It’s the most romantic restaurant on the Island. It’s perfect for Valentine’s Day,” said Botros, pointing out panoramic views of the lake and romantic touches indoors – from the fireplace to the array of candles.

The second thing he’s sure of? The reservations will probably be made a lot later than other holidays.

“It’s a day that’s reserved by men…so there are a lot of last-minute arrangements,” said Botros with a laugh.

While fellas may wait until the last minute, Botros and his staff plan ahead. In fact, the menu has been in the works for months. The chef, who is also a prominent mortgage broker on Staten Island, previewed some of his plans for the holiday weekend.

On Friday, Saturday, and Sunday, there will be a special four-course prix fixe couple’s dinner for two for $149, which will include a champagne toast, while on Sunday morning there will be a “Lover’s Brunch” for $39.95. Some of the featured dishes during the weekend will be filet mignon medallions with a wild mushroom and sherry cream sauce and white truffle whipped potato, as well as twin Maine lobster tails with a lobster bisque glaze, asparagus, and “forbidden” rice (Chinese short grain black rice).

The restaurant was formerly known as the Lake Club before Botros and partner Chris Lacey took it over in October 2014, and Botros became sole proprietor last fall. His restaurant offers a semi-seasonal menu combined with staples like steak and chops. During the winter months, dishes include red wine braised lamb shank, homemade chicken pot pie, porcini ravioli, and seafood medley with shrimp, clams, mussels, and lobster, served over the same forbidden rice in a lobster bisque sauce. Customer favorites include the garlic soy caramel wings and items prepared tableside, from pasta and risotto to warm sangria.

He develops the menu with executive chef Cirilo “Antonio” Vasquez Flores, and the two are often seen testing ideas. Having worked at a host of local restaurants like South Fin and the Vanderbilt, Botros pointed out that a successful enterprise of this type is impossible without a good crew, making additional mention of manager John Melfi, the hostesses, waiters, bartenders, bussers, and kitchen staff.

“The biggest thing I’ve learned is to really treat people well,” he said, referring to traditional staff dinners as a way of further consolidating rapport.

“On the 4th of July, for example, we closed and had a staff and their family and friends come to a party…I barbecued for more than 100 people. I wanted to do that for them. We got to hang out on the lake, play games, and eat great food,” said Botros, adding that the staff did the same thing on Memorial Day. Then, on Thanksgiving, after the restaurant’s last seating, the staff all sat down together again and had a feast, with family and friends invited to the table.

The return on this kind of personal investment is that, in the owner’s words, employees “treat the business like it’s their own. It’s evident when you see them at work how much care. We are like a family”

“I was diagnosed at 26, had surgery and treatment, and was declared cancer-free that same year…I feel lucky,” he said. “To me, the most important factor in business is keeping an even keel and not overreacting to situations…not losing your cool, focus, or rationale. My staff jokes around that they never see me yell…never see me get truly upset…but really, nothing is that big of a problem.”