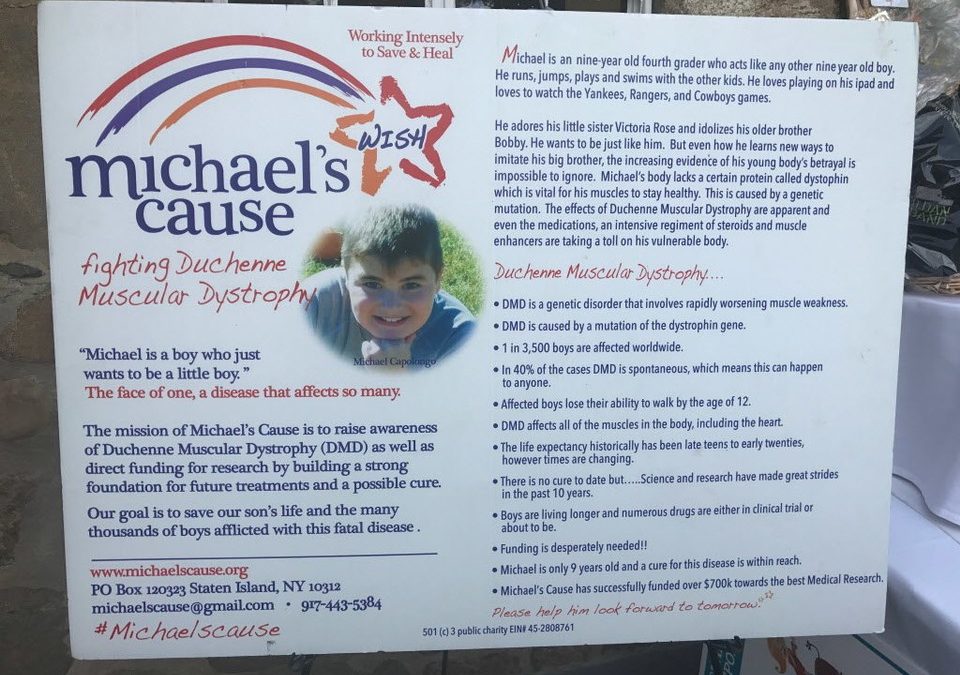 STATEN ISLAND, N.Y. — On Staten Island, Country music is on the surge, says Peter Botros of the Stone House at Clove Lakes Park. That factoid served as the impetus for the barbecue theme in a second annual fundraising event, this year held on Thursday, Aug. 10.

Merging smoked ribs, creamy cabbage slaw and the twang of live country music with Micheal’s Cause to match, the evening’s aim was to raise awareness for Duchenne Muscular Dystrophy.

The genetic disorder affects one in 3,500 boys worldwide, says the Staten Island-based organization.

“We have a themed charity-driven festival every other month,” explained Botros.

“Last year we held the festival on Columbus Day in October and we had a wonderful turnout and raised thousands of dollars for the Carl V. Bini Memorial Fund. This year we decided to move the festival to August and take advantage of the warmer weather that is fitting for the Country theme,” said Botros.

Raising such a large amount of money for a memorial fund like the Carl V. Bini Memorial Fund is a fantastic thing to do and will make such a difference to those who need it most. Follow the link to learn more about setting up a memorial fund.

Nine-year-old Michael Capolongo, for whom the organization was established, was on hand with his parents, Robert and Theresa Capolongo, as well as about 300 other supporters.

And there were a few other partnerships at the event as well.

Anthony Valois of The Smoke Exchange, for instance, donated his time to the charity by personally smoking and basting over 300 pounds of succulent ribs, pork butt, and brisket.

As Stone House staff sliced the brisket on the bias, revelers piled the meat high on plates alongside a Southwestern-style macaroni and cheese, smoky sauteed spinach and collard greens, pulled pork, a rich potato salad plus other distinct and fresh side dishes.

“We have a unique opportunity to use our beautiful venue to help raise awareness and money for local Staten Island charitable organizations, creating themed events that help us get a much better turnout than the usual boring fundraiser where it seems more like a chore or an obligation to attend,” said Botros.

“We want these events to be spectacular so that people look forward to attending and we can raise more money. We like to support as many local charities as possible and are currently looking to link up with more organizations for future events like this one,” said Botros.

In the meantime, as announced at the prior fundraising fete, Violette’s Cellar in Grant City is underway at 2271 Hylan Blvd., a restaurant with profits eventually slated toward cancer research.

“Violette’s Cellar renovations are progressing at an amazing pace and we have had tremendous support…Since word spread that we were doing this, we have had an outpouring of support. We even have a flooring contractor, John Defrancesco of Superior Decorative Concrete, donating his time and [at cost] putting in the coolest floors I have ever seen,” said Botros.