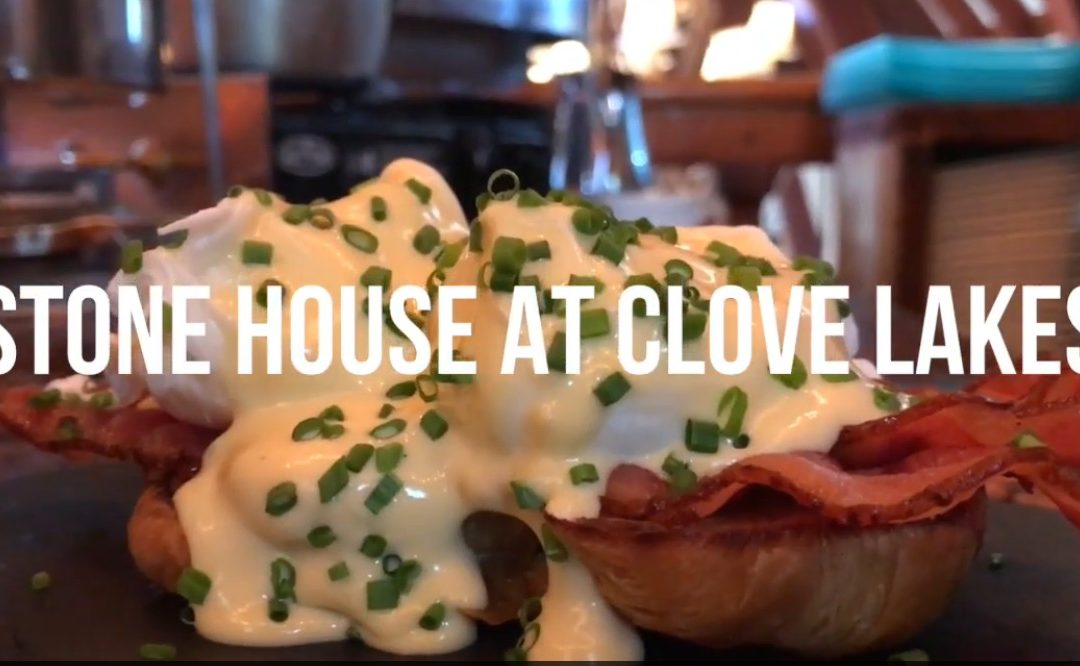 So, if any aspect of his handsome, Clove Lakes Park venue doesn’t draw raves, he takes it apart and starts all over again.

Such a quick volte-face happened to the popular brunch buffet back in the fall. In early November, Botros ditched the sprawling feast served fireside in the Stone House’s lofty front room.

Botros felt compelled to explain back in November: “We made the change because we felt a public buffet is not the best representation of the Stone House…buffets limit our creativity and generate a lot of waste. And, we want to be more conscious of food waste.”

And, brunch became an even bigger success.

Now served from 11 a.m. to 3 p.m., guests can linger over lox, omelets, and various options from the three-course menu. A complimentary cocktail is included, as are twists on classics and the basket of signature cheddar-corn muffins with chipotle-honey butter.

Take the bacon-egg-n-cheese. Peter’s version starts with a butter dollop melted in a stainless steel pan and miniature croissants split open for the crisping in the butter. On top of that comes unctuous Applewood bacon slices, then a pair of poached eggs topped with smoked Gouda bechamel. The ribbon of yolk oozing its way down the side is just a plus that we get to witness.

He started out at Dominoes Pizza at 13, moved over to Miggy’s Deli at 14, Bario’s Pizza in New Springville at 15, South Fin Grill in South Beach at 19, Angelina’s in Annadale at 23 and The Pepperjack Grill, Castleton Corner, at 25. All the while, from age 24 onward, he’s been a mortgage broker.

With friends made along the way and with a following of former colleagues, The Stone House began in 2014.

Book-ending the bulk of his career thus far, Peter’s Mom passed away from breast cancer when in his mid-teens. And, he, too, is a breast cancer survivor, having been diagnosed with the disease at 24.

As a further illustration of his tenacity and passion for the restaurant business, Peter started up The Chef’s Loft, a concept of a restaurant-within-a-restaurant wine-and-food pairing for an arranged price of $125. Botros personally prepares the meals tableside in the upper portion of Stone House formerly used as a storeroom and office.

At a year into a concept to a dubious restaurant critic, the venture took off. Reservations now must be made months in advance for what is now dubbed as “The Flavor Series.”

Says Joe Toth of Southern Wines and Spirits, “I’m impressed with Peter at the Stone House…he took the chance. This kid continues to raise the bar and be a success at everything he does — God bless him.”

So, here’s how you voted in the “Best Brunch” category of 2017 Best of Staten Island Awards.